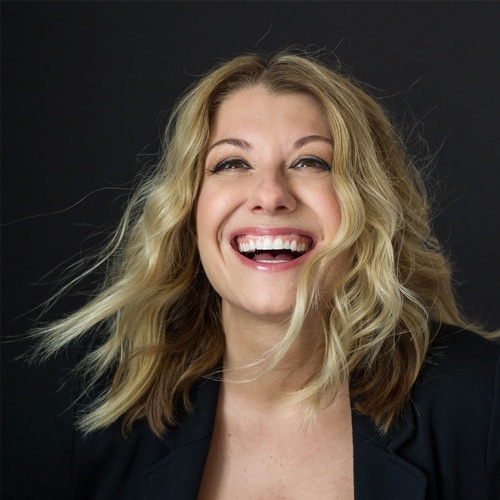 Laurie Ruettimann is a former human resources leader turned writer, speaker, and entrepreneur. She is known for her commonsense style and straightforward approach to workforce issues. Her podcast, Punk Rock HR, is one of the fastest-growing management and business podcasts on iTunes, Stitcher, Spotify, and Pandora.

Laurie’s career began in 1995 at a candy company where she provided HR operations assistance and recruiting services in a manufacturing environment that was heavily unionized and staffed with immigrants from war-torn Bosnia. Since those glorious days, she’s worked at Monsanto, Alberto-Culver (now Unilever), Kemper Insurance (out of business), and Pfizer.

Laurie began blogging in 2004 on a nascent platform called BlogSpot while working at Pfizer, telling stories that would likely get her fired. After laying off thousands of workers and watching her husband lose his job at the same company, she exited corporate America to focus her time and attention on speaking truth to power by writing, speaking, and advising companies on how to make HR better.

Laurie has been featured on major American media platforms such as NPR, The New Yorker, Vox, and CNN. She is the creator of the websites The Cynical Girl and Punk Rock HR, which Forbes named as one of its top 100 websites for women. She was a contributing editor for The Conference Board Review and a contributor to online ventures such as Mediabistro, AOL, and BusinessInsider.com.

Laurie believes that self-leadership and individual accountability are the competencies required for the future of work. Her advice has been featured in a variety of publications—including CIO Magazine, Entrepreneur, Fast Company, Inc., Men’s Health, Real Simple, The New York Times, U.S. News & World Report, USA Today and The Wall Street Journal. CareerBuilder and CNN have recognized her as a top career advisor in the United States.

Laurie is a sought-after public speaker who delivers keynote speeches to audiences all around the world. She appeared onstage at the 92nd Street Y and Harvard Business School, founded GlitchPath, an early-stage start-up focused on project management, and started ​a new podcast in April 2018. Her book called Betting On You: How to Put Yourself First and (Finally) Take Control of Your Career with Henry Holt & Company was published in January 2021.

COVID changed the world of work and uncovered a hard truth: millions of us are overworked, exhausted, and trying our hardest—yet not getting the recognition we deserve. It’s time for a fix. In a session packed with insights and stories from her book, Ruettimann will lay out the framework necessary to elevate and promote the employee experience while championing personal interests and creating a life you enjoy.